I warned you that I'm slightly crazy about Halloween (just wait until I share my costume for this year!) so the Halloween-themed activities continue... This week we're working on making slime.  Traditionally, and with older kids, I've made slime with the classic combination of Elmer's glue and Borax.  However, because of the ages of my girls, I decided to seek out some alternative recipes for a safer, "edible" (but not necessarily tasty) slime.  I couldn't decided between a couple of recipes, so we're going to have a "Slime-Off" and each girl will make one of them and then we'll compare them to declare a slime winner. 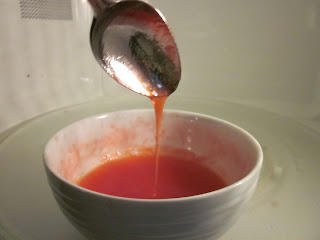 Slime 1 Directions:
After making both several times, I think Slime 1 is the more child-friendly slime to make and has a truer "slime-feel" to it.  To start, add the soluble fiber to 1 cup of water in the container.  Add 2-3 drops of food coloring - it will get darker as it cooks so don't go overboard on the food coloring.  Secure the top and have your child shake the container for about one minutes.  Pour the mixture into the microwave-safe bowl and cook in the microwave on high for 1-4 minutes, or until the mixture starts to boil.  When it starts to bubble vigorously, stop the microwave and stir the mixture.  Cook for another 1-2 more minutes and then stir again.  Repeat 3 to 4 times.  You will know when you are getting close when you stir the mixture and lift up the spoon and the slime makes a thick tendril leading all the way back down to the bowl, as shown in the picture.  Once you get to that stage, you can stop there if you want a more liquid slime or cook for another 1-2 minutes if you want a stiffer slime.  Spread the slime into a large bowl to cool - be careful because it will be very hot!

Slime 2 Directions:
This slime is a little more difficult both because it requires the use of a stove top, which makes it difficult for young children to be involved, and also takes more time.  To make this version, stir together the cornstarch and the sweetened condensed milk in the small saucepan.  Place over low heat.  The mixture will become thinner as it heats and then start to thicken.  It took us about 20-30 minutes, but it depends on the relative heat of your burner and the type of pan that you use.  I noticed that the mixture next to the sides of the pan started thickening first.  You can take it off at that point to have a thinner slime or cook it a little longer to thicken it up a bit more.  I left one batch on for about 10 more minutes and it became the consistency of a very thick butter cream frosting - not very slimy in my opinion!  Spread the slime onto a large plate to cool - be careful because it will be very hot!

Slime Off!
Now the fun part!  Give your child a sample of both of the slimes and let them play with them for a bit.  It is helpful at this point to have a big bowl of soapy water and a hand towel easily acceptable for them to clean themselves up.
Once they are finished, have them draw a picture of the slimes in their science journals as well as observations about each of the slimes that they made.  Finally, ask the child to assess which recipe made the "better" slime in their opinion and have them justify their answer.  The both liked the fiber-based slime better - they described it as "cold", "like jello", and "slimy".  The condensed milk based-slime was "squishy", "oozy" and "gross".

As these were supposedly "edible" slimes, I did give the girls the option to taste them...
Make sure to dispose of the slime in the trash as it can wreak havoc on pipes!

What's Happening?
Slimes are a great examples of a class of molecules called polymers.  Polymers are long chains of molecules that are often cross-linked together to form a unique substance.  The resulting substance often displays the characteristics of a non-newtonian fluid, like we discussed earlier with the oobleck experiment in that the viscosity changes depending on how much force is applied.  The substances are also often very stretchy because the cross-linking acts as miniature springs holding the long chains together.  Polymers are found both in nature and are man-made.  Common examples of polymers are rubber, nylon, bone, plastics, styrofoam, silk and, my favorite, Silly Putty!

If you want a much more in depth (complete with chemical structure drawings!) explanation of what is happening with slime, check out this site.

Extensions:
Play with quantities of ingredients and cooking time.  You can also substitute ingredients - we ended up using a sugar-free Metamucil left over from my first pregnancy five years ago.   I am very curious about what would have happened with a regular version of it.  I also feel like gelatin should work, but haven't tried that yet.  Please let me know if you do try it or find a recipe!

There are also a huge variety of slime recipes collected at About.com, many of the edible versions have variations on the types that we made. For example, chocolate slime can be made by following the directions to Slime 2, but adding 2 tablespoons of chocolate syrup and increasing the cornstarch to 1 1/2 tablespoons.  Apparently, you can also substitute tonic water in the recipe for Slime 1 and the end product will be a slime that glows under black light due to the quinine in the tonic water.

In the topic of polymers, there are many other polymer-type recipes on the web. This site has a huge variety of them to check out.  You can also make a slime out of milk protein - check out directions here!