Welcome to our first experiment! This is an old standby of mine; I first did it when I was teaching Comprehensive Science at Newark's Arts High School right after I graduated from college. It was at the beginning of the year and we were talking about the phases of matter. I wanted something to capture their interest (and messy things tend to do that!) and also where we could discuss some of the basic principles of science investigation. (At that point, I didn't have any textbooks so I was flying a bit by the seat of my pants, but that's another story.) The kids loved it; the janitorial staff, not so much (although I tried to make it up to them later with baked goods).

So, yes, this experiment is messy, very messy. There are a few ways to modify it so that the mess is limited but just be forewarned. And, as always, emphasize to your kids that nothing in the experiment should be eaten! (In this one, these are all basic kitchen items, but uncooked rice is not a fun thing for little tummies.)

Process:
I divided this activity into three sections, and with the time required to record information in their journals, it took the girls about an hour to do. If you don't want to spend that long, you could divide it over a couple of days or omit the journal component.

Part I - Solids and Liquids 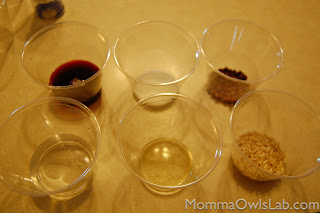 Divide the solid and liquid kitchen materials into your cups. Place the cups in front of the child and ask them to feel each of the materials. (You might want to have a wet paper towel or rag handy for finger-wiping.) Once they have done that, ask them to sort the cups into two groups with things that feel like one another in each group. They should put all the solids together and all the liquid together. If they don't, help them with this process.

Another thing that can be done during this stage is to talk about inferences, or guesses, that they are making. This is one of the reasons that I chose sugar as one of my solids. The girls automatically guessed that it was sugar (alas, we are a family of sweet tooths) but I made the point that it didn't have to be and opened the pantry, took out the canister of salt and poured that into another cup so they could see how similar it was to sugar. We talked about how else we could tell it was sugar vs. salt and, of course, taste came up (which I wouldn't let them do this time) but also the other senses. Interestingly, salt and sugar look very similar to the eye, but under the microscope one can see that salt tends to form geometric cubes while sugar has a more hexagonal shape. (This website has some great pictures of this, as well as lots of other interesting things both within the realm of science and without.) 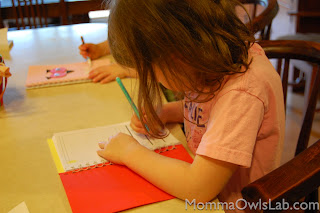 Once you feel they understand solids and liquids, ask them to draw a picture of their cups in their journal. (In our case, I wrote all the words for my little one. My older one wrote the titles at the bottom of the first one (oops) but I helped her label her pictures.) 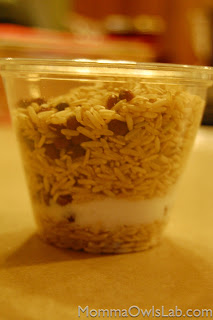 Ah, future scientists, here we go. The next step is to create mixtures and this is where it can start to get messy. If you have a high-tolerance to mess (I have to admit that I generally do), then by all means let the kids mix the materials themselves. Encourage them to mix liquids with liquids, solids with liquids and solids with solids.

One interesting thing that developed with our mixtures is that we were able to talk about the idea of dissolving because the girls mixed sugar with water and also beans with water. The sugar dissolved into the water, leaving the mixture still relatively clear (think: simple syrup) in contrast to the beans sitting at the bottom of the cup of water.

Again, allow time at the end to record what happened in the science journal. 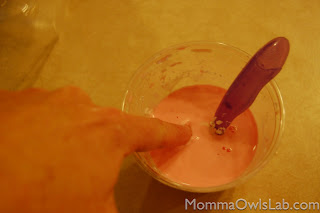 Okay, here's where it can get really messy! To make the oobleck, mix the 1/4 cup of cornstarch with the 3 tablespoons of water (which you can add food coloring to if you like - we made ours pink!). It can be a bit tricky to get the right consistency, so this part may require a lot of adult assistance. Note that because of the nature of oobleck, its actually better to stir with a softer hand - the greater the force you apply the greater the resistance it will give and the harder it will be to stir. Essentially, you want to keep adding water until the cornstarch is evenly incorporated into the mixture AND if you stab the mixture with your finger it feels pretty solid, but if you gently press your finger into the mixture it will go down into the ooze. (More on why this happens in a bit.) 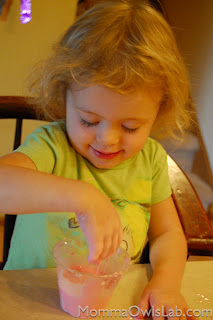 Once the oobleck is mixed, it is time to play. At this point, if you want to limit the mess, gently pour/spoon the oobleck into the plastic sandwich bag, carefully seal the top and give it to the kiddo. Let them squeeze and fold and manipulate the bag to see what happens to the mixture instead. If you are a little more adventurous, let them put their hand into the cup and mix and squeeze and manipulate the oobleck inside the cup. (On the plus side, oobleck is very easy to clean up with a warm washcloth. I have always done this in rooms with floors, so I don't know about removal from carpets - sorry!) As they are playing, ask them if they think the oobleck is a solid or a liquid.

Again, give the child time to draw in their journals at the end of this part of the activity. As this is the real experiment for this activity, it is good to have them record their guess as to whether its a solid or a liquid as well. (Both my girls thought that it was a liquid.)

Science Talk
So, the answer to whether its a solid or a liquid?  It's both!  Oobleck is actually a mixture.  It is considered a colloid, which is a liquid with solid particles floating in it.  Another example of a colloid is paint.  Oobleck is also interesting because it demonstrates the principles of a non-Newtonian fluid - solid when force is applied to it with the ability of a liquid to flow without the force.  I've read somewhere that if you make a big enough batch, you could walk on it!  (I'm adventurous but that is a little much even for me...)

Visit the science process skills page for more information on the different skills.  I hope you enjoy this activity!   If you try it, please leave me a comment to let me know how it goes!