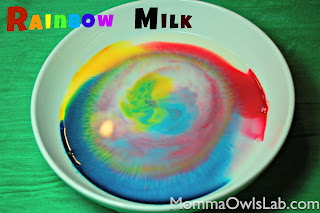 Rainbow Milk is a relatively new experiment to me.  I was first introduced to it via a Facebook post of a friend who was complaining about the fact that it didn't work which, of course, made me curious.  If you haven't seen this experiment before, essentially blue, red and yellow food color is dropped in a triangular shape in a bowl of milk.  Dish detergent is then added to the middle and the food coloring starts to move across the milk, creating rainbows.  The reasoning behind it is a bit complicated (I'll talk more about it later), but for young kids its a great way to explore a little about what makes up milk.    You could also talk about rainbows, color combination and surface tension - all in one small experiment!

Part I - The Phenomenon
Like the last experiment with oobleck, we broke this down into a few distinct parts.  For the first part, I had the girls observe while I showed them the basic phenomenon.  (It wasn't quite that simple; I had to profess with the most extreme sincerity that they would get to do it on their own in just a bit.)  If you have less time to work with, or want to use this more as an example of color mixing, then just doing this first part would definitely work! 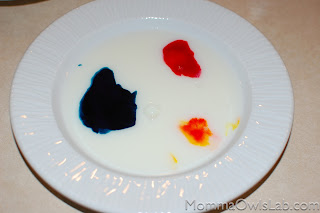 To make Rainbow Milk, pour some of the 2% milk (1% or whole would also work, but don't use skim - more on that later) into your shallow bowl.  Let it settle and warm up a bit.  Carefully add three drops of each food color (red, blue and yellow - not green!) into the milk spaced around the bowl in the shape of a triangle.  (See picture.)  Take a cotton swab, dip it in the dish detergent and carefully place it in the middle of the bowl.  Watch the rainbow that develops - it may take 5 minutes or so to fully develop.

If you are using science journals, then give your child a couple of minutes to draw a picture of the rainbow that develops.

Part II - The Effect of Fat Composition on Milk Rainbows
There are a variety of factors that cause the Milk Rainbow to form (more on those in the Science Talk section below) but the important things for kids to understand to do the next part of the experiment is the fact that one of the things that makes up milk is fat and that once the detergent is added to the milk it spreads out and grabs the fat in the milk.  Another important concept is the idea that different types of milk have a different level of fat content - skim milk having none on up to heavy cream with a very high fat content (but, oh, so delicious). 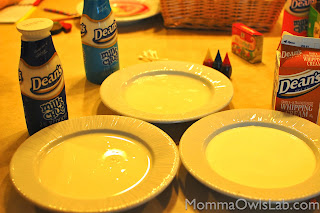 For this part, pour three bowls of milk with the three different types of milk - we were using skim, 2% and heavy cream.  Again, you really could use 1% or whole in place of the 2%, and even skip the heavy cream entirely and just use two different bowls if you prefer, but being able to compare to skim milk is pretty important so don't skip that one.  The kids should be able to tell that the color is distinctly different between the three bowls as the whiter/creamier the color meant the greater the amount of fat.  Ask your child which bowl they think will make the best rainbow. 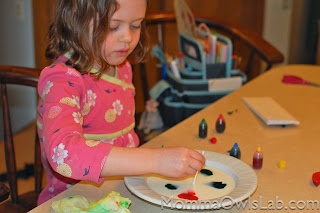 Repeat the same process as above.  At this point, depending on the age of the child or children you are working with (and their hand-eye coordination!), you can let them add the food coloring into the triangle shape if you wish.  Add the detergent as before, trying to do it at the same time for all the bowls.  Again, allow 5 minutes or so to pass to really have time to observe the rainbows and have them again draw pictures of what they see in the journal.

The pictures below show the three different bowls, with skim on the top, 2% in the middle and cream on the bottom.  (Sorry for the poor quality; my flash and I were not seeing eye to eye at that particular moment!  Ha!)  You can see why using the skim is important - it really didn't demonstrate the current-like mixing that caused the rainbows to develop in the other two.  Which makes sense, right?  If the skim doesn't have any fat in it then the dish detergent wasn't able to grab onto anything to cause the currents to form.  (My friend must have used skim milk, which was the downfall of her experiment.)  Interestingly, the cream did create rainbows but they were very small and very slow forming. 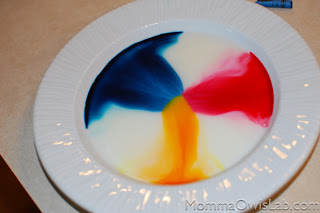 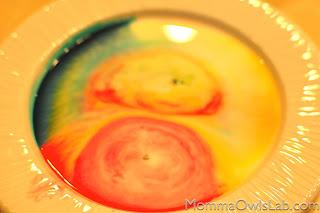 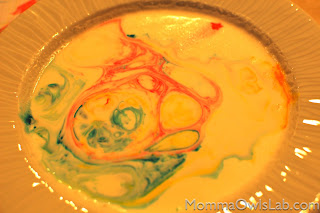 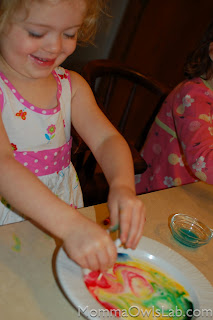 Originally, I was only going to do the first two parts, but after the experiment my oldest, who had been responsible for putting in the food coloring and detergent into the skim milk, was feeling a little down that "her" milk didn't "work".  So, we poured two new bowls of milk and let them play a little on their own and it turned into a good learning experience so I thought I'd mention it here.  (I shouldn't be surprised - unstructured play is almost always better for developing minds than structured play.)  The girls added the food coloring in different spots in the bowl. They also experimented with touching the detergent in different places in the milk and even blowing on the milk to see how that affected the rainbows.  Overall, the girls had fun and probably remember this part of the activity more than anything else.  And, if they leave with the idea that science is fun, then I figure I should consider it a successful experiment!


Science Talk
As I mentioned above, there are a few things that are going on in this experiment.  First and foremost we were playing with the idea that milk is a mixture of a variety of substances, including protein, vitamins (think: Vitamin D), minerals (think: calcium) and most importantly, at least for how I structured this activity, fat.  Secondly, there are a couple of different characteristics of soap that make it an important role in the activity (try touching the milk with just a dry cotton swab - nothing much happens!).  Soap is a surfactant, meaning that it breaks up the relatively high surface tension of water, allowing the soap to better attack food residue, or in our case the food coloring.  Also, soap contains two chemically distinct ends, one of which is hydrophilic (literally "water loving") and the other is hydrophobic (literally "water hating").  The hydrophobic end may hate water, but it likes oils, so it grabs onto the oils on the plate, or, as in our case, the fat in the milk.  This action of grabbing onto the oil creates the current that we see in the rainbow milk experiment.

If you want to read more, I found this and this website helpful with background information.  And, there are lots and lots of videos of the Rainbow Milk experiment on YouTube.

Visit the science process skills page for more information on the different skills.  I hope you enjoy this activity!   If you try it, please leave me a comment to let me know how it goes!