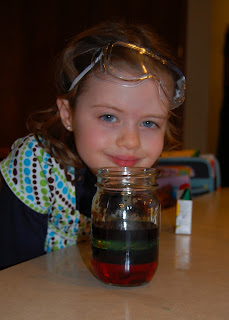 This activity is a combination of several different density experiments, from introducing the concept of density to eventually creating a density column of different colored liquids.  Density is a difficult concept for a small child to understand, so I'm sure we will need to touch back on it several times.  Luckily, there are lots of fun things to do with density!

Process:
Part I:What is Density?
Fill the containers with an equal amount of each of the dry foods. 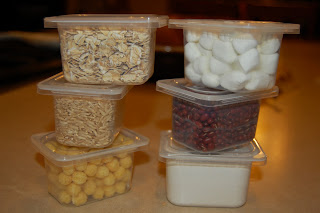 Give the containers to your child and ask them to place them in order from the heaviest to the lightest.  To do this, encourage them to select two at a time, shake them and decide which one seems heavier.  Place them apart and select another container to compare to the two that have already been compared.  Continue with this until your child has placed them in order from heaviest to lightest. 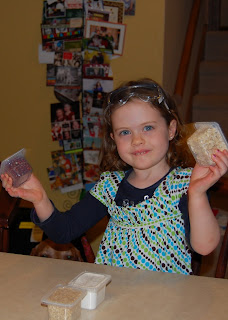 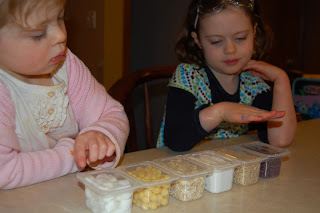 Ask your child how they can determine if the order they placed the containers in is accurate or not.  If they have a problem trying to come up with idea of using a scale, ask them what the doctor uses to weigh them when they go to an appointment.  Use the kitchen scale to weigh each of the containers and record the amount.  We used a piece of paper beneath the containers to record the weight, but you could also write it on the container itself with the dry erase marker.  The girls did a pretty good job, only mixing up the marshmallows and Kix! 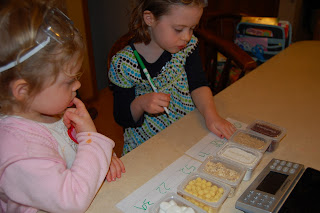 Part II: Oil and Water
Once your child has a general idea of density, ask them what they think will happen if you mix two liquids of different densities.   Add 1/4 cup of water and 1/4 cup of vegetable oil to two of the plastic cups to test the prediction. Weigh each of the cups and determine which liquid weighs more and therefore, because they have the same volume, which has the greater density. 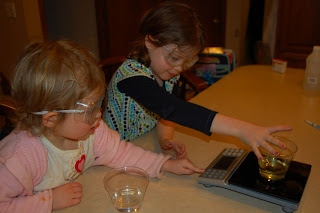 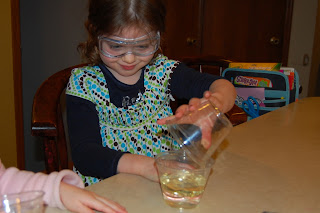 Part III: Density Column
Pour 1/4 cup of each liquid into your plastic cups. If you are using anything thick and sticky, use a spatula to scrape the inside of the cup to make sure you got a full measuring cup of the liquid.  I didn't do that and when we weighed the corn syrup, it appeared like it was less dense than the simple syrup so we incorrectly put the simple syrup on the bottom. 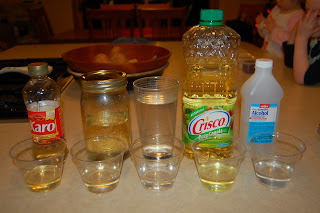 Weigh each of the liquids, write the measurements on the outside of each cup with the dry erase marker.  Put the cups in order from most dense to least dense. 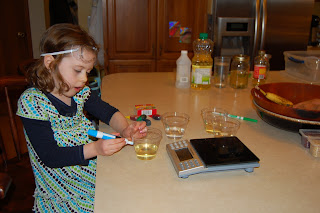 Color the different liquids with food coloring.  Note that because the oil won't mix with the water-based food coloring you will need to leave that one yellow.  Be careful to only add a couple of drops of food coloring to each one - I let the girls squeeze out their own and the colors got so dark that it was hard to distinguish between the red and orange and between the green and blue.  Also, you may want to dye the liquids such that the similar colors won't end up next to each other in the density column.  We made the corn syrup orange and the simple syrup red which made it hard to distinguish in the final column. 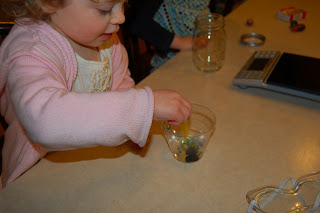 Very carefully layer each of the liquids on top of each other.  The easiest way to do this is to tilt the jar to the side and pour the liquid slowly in so it hits the side first rather than the other liquid first.  Then slowly stand the jar back up, let the layers settle for a bit and then add the next layer.

Our final result is below.  See how dark our layers became?  Oops!  I had to hold it up beneath a light in my kitchen to get a semi-decent picture.  Maybe I need a light box!!  Hmm... 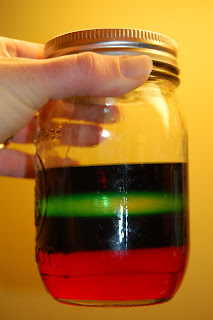 What's Happening?
In simple terms, density is how much of something is found in a given space.  The actual way to calculate it is density = mass / volume.  This obviously is way beyond what my young children are capable of understanding so I've simplified the activity by using the same volume for all the samples.  By keeping the volume constant, the changes in mass reflect the different densities of the substances.

Another concept that is explored in this experiment is miscibility, or how mixable, the different liquids are.  Oil and water don't mix and if those layers are mixed while make the column they will separate back out but the rest of the liquids that we used were water-based so if they got mixed accidentally they would not separate back out again.  (That's why you have to be so careful when layering the different liquids.)

Extensions:
There are some great examples of density experiments in the blogosphere.  If you want to try another version of a density column, I love the "Density Rainbow" experiment found at the Candy Experiments website.  In the experiment, you add different numbers of Skittles to the same quantity of water - a simple but beautiful way to show that the solutions with the greater amount of "stuff" (greater density) should be at the bottom of the density column.  It is a bit difficult to layer them because they are so similar, so Loralee recommends using a syringe if you have one.  Another great experiment from The Scientific Mom is the floating egg demonstration that uses the addition of salt to water to change the density of water to the point where you can make an egg float (instead of sinking).

Another thing you could do is give your child three film canisters and have them try to fill them so that one of them floats, one sinks and one floats in the middle of the water.  Give them a variety of materials which they may use to fill them.  This might be a fun thing to try in the bath tub!

For older students that are capable of division, provide them with a variety of regular-shaped objects that they are able to measure (in cms) the length, width and height of then have them calculate the volume.  Use a kitchen scale to measure the mass (in grams) and then have them calculate the density of each object using the density equation.  Have them record all the measurements in their science journal and then use the results to predict whether or not the object will sink or float in water.  (The density of water is 1 gram / cubic centimeter.)  If you have irregular-shaped objects, you can calculate the volume by using the water displacement method.

Finally, remember those Cartesian Divers from back in the day?  Here's a great experiment with explanation of how to make your own using a condiment packet.  (The link opens a pdf.)  Eye droppers can also be used in place of the condiment packet.

I hope you enjoy this activity!  If you try it, please let me a comment to let me know how it goes!