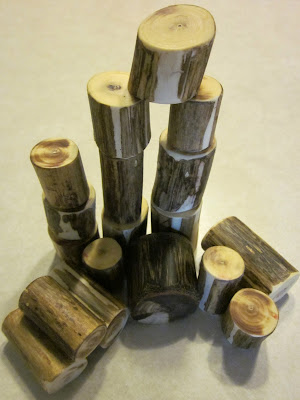 I thought I'd start this post with a public service announcement:

No trees were harmed in the making of these blocks.

I am, by no possible scope of the definition, a woodworker.

And, I'm not so sure this was such a great project for an almost 6 mos pregnant lady like myself - too many contortions required by my less-than-mobile body!

Now that that's out of the way... I'd seen some cool, natural wood blocks in a catalog awhile back and loved them, but thought they were a little pricey.  Then, my friend had a black walnut tree taken down on her property and said she had some fairly good-sized branches left and my mind started ticking.  So, I decided to make these to enter into an auction for our local chapter of Wild Ones, a native plant organization that I am involved with.

There are several other blogs that talk about how to make blocks like these, including "Life on Willowdale" and "Home in the Country".  They both left the bark on, but for these I decided to try to remove the bark partly because it was fairly covered with lichens and also because of the nature of black walnut wood - it has really cool striations of the darker heartwood and lighter sapwood that I hoped would show better with the bark off.  (And, let's face it, because I like to make things harder on myself than necessary.)  There is also a Google Doc from the State of Minnesota DNR and Project Learning Tree that has some useful information in it.

Here is roughly the process we followed:
1.  Collect the wood.  We started with several branches, each about 6' long and ranging from about 2 1/2" at the base to 1" thick at the tip.

2.  Remove the bark (if desired).  I used a 1" chisel to do this.  (I actually wasn't that successful in this - although it still ended up looking pretty neat - on a lot of the pieces the very innermost layer of bark remained.  For more information on the tissues in a tree branch, check out this site.)  If you remove the bark, then you should sand the branch smooth before you go onto the cutting step.  Start with course sandpaper and then work your way to fine.  (I used 60, 100, and then 150.)

3.  Cut the branch into your blocks.  Try to vary the cuts so that you get a variety of different lengths and widths for your blocks. I used a compound mitre saw, but you could definitely use a hand saw.  Sand the cut edges so that no rough spots remain.  I used a coarse and then a fine sandpaper.

4.  Dry the blocks in an oven set at a very low temperature (200 degrees or lower) for a period of 2 to 5 hours.  To do this, place a wire cooling rack on top of a metal cookie sheet, then add a piece of parchment paper to the top.  Put the blocks on this set-up and periodically rotate the blocks.  Because I'm a geek, I also weighed a couple of the blocks every half-hour - they lost about 10% of their mass by about the 2 1/2 hour point and then stayed pretty consistent for the next hour so I turned off the oven then.  It will be interesting to see if they crack over time, though.

5.  Re-sand the blocks, if necessary.  I noticed that the drying out process seemed to roughen my edges a bit so I did a quick sanding job.

6.  Coat with a protective layer.  I used a jojoba oil/beeswax mixture that I bought a while ago from Jupiter's Child on Etsy.  (I also bought an adorable carved wooden squirrel for our nature table - they have some really cute things!)  I think you can make your own using olive oil and beeswax (or jojoba oil, which smells amazing, if you can find it).  Rub the wax/oil mixture onto all the surfaces of the block.  (An aside: Rub the mixture into your hands.  Ah!)  Let sit for at least an hour then buff off with a smooth cloth. 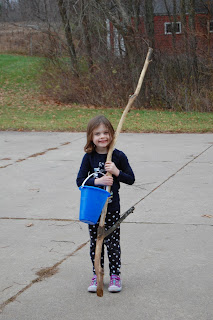 If you end up doing this project, please let me know how it turns out and, as always, if you have any ways to improve it!  (As I said, I'm not a woodworker!)  You can also add any pictures to a new Flickr group I just created, Activities with Momma Owl's Lab.